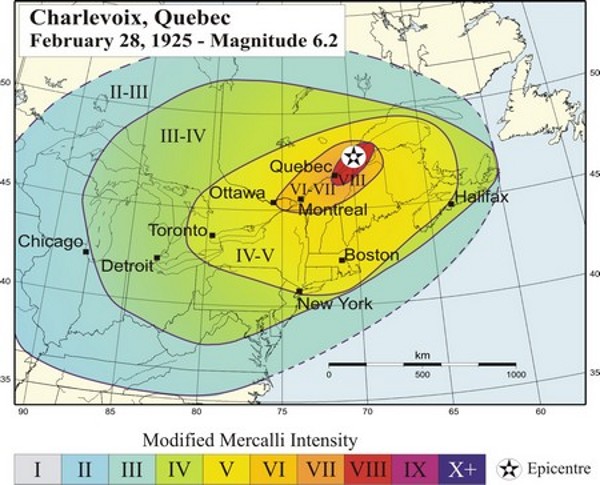 Replies to questionnaires indicate that the tremors were felt as far south as Virginia, as far west as the Mississippi, as far east as the Atlantic and as far north as a lone camp 80 miles north of Lac Saint-Jean. This comprises an area of over 1,000,000 square miles and it seems likely that an additional 1,000,000 square miles of uninhabited northern wilderness and Atlantic Ocean bed were similarly shaken.

You can consult the 1931 version of the Mercalli: it bases the intensity at a given place on the effects of the earthquake, on natural features, on industrial and urban installations and on human beings.

Intensities in given places were determined using felt reports sent by people across the country. Felt reports image was sent in 1925 by a resident of Les Éboulements, near La Malbaie. Hundreds of similar reports have to be analysed for every major event in Canada for the seismic analists to be able to define an intensity contour map.

The isoseismal map shows regions of different intensities according to the Modified Mercalli Intensity Scale. Those zones have been defined using the felt reports.

If you want to know what the intensity was for this event in your locality with a description of damage associated, and examples from Smith and Hodgson's scrapbook, lists of Canadian and U.S. localities are available in alpabetical order and in decreasing order of intensity.