This earthquake is the largest instrumentally recorded earthquake to have occurred along the eastern continental margin of North America and, coincidentally, is also one of the largest known earthquakes north of the Arctic Circle. In spite of its size, the 1933 earthquake did not result in any damage because of its offshore location and the sparse population of the adjacent onshore regions.

For many years the only known reports of the earthquake being felt were from the Upernavik, Greenland region (see map). It was determined not to have been felt in Thule to the north or in Diskofjord to the south. One would have expected the earthquake to have shaken the closer northeastern coastal communities of Baffin Island but, at that time, there had not been a concerted effort to collect felt reports from northern Canada. Recent access to the Hudson Bay Company log for Clyde River (see map), however, uncovered a clear statement that the earthquake had been felt in that community but caused no damage.

The northwestern Baffin Bay -northeastern Baffin Island region continues to be seismically active and is one of the most active regions in eastern Canada. Five earthquakes of magnitude 6.0 or greater have occurred here since the 1933 earthquake. The latest moderate-sized earthquake in this region was a magnitude 5.1 event on April 15, 2010. 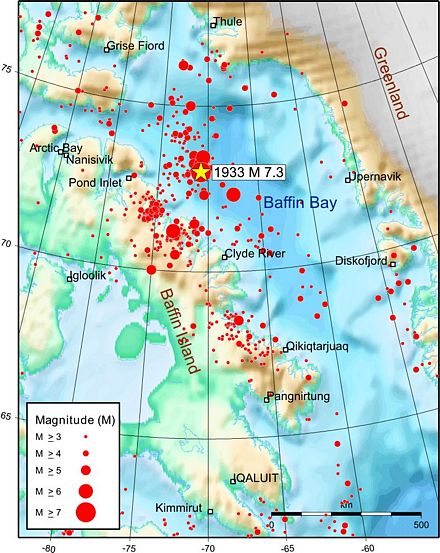