Rock and Roll in the N.W.T.: The 1985 Nahanni Earthquakes 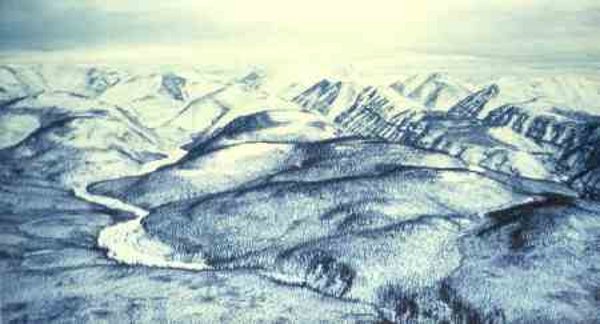 The Nahanni Range of Canada's Northwest Territories, formed 60 million years ago in the Laramide Orogeny, still shows the effects of that long-past upheaval in extensive thrust faulting and folding. The North Nahanni River cuts through the mountain ranges from west to east.

A remarkable and unprecedented sequence of earthquakes is shaking the mountains west of Fort Simpson in the Northwest Territories. A magnitude 6.6 earthquake on October 5, 1985, and an even larger magnitude 6.9 event on December 23, 1985 disturbed the beautiful and mysterious Nahanni region of the Mackenzie Mountains. Between these earthquakes, and still continuing today, a long succession of aftershocks rumble and jolt the area.

The earthquake sequence amazed both the general public and the earth science community. People in the Northwest Territories, the Yukon, Alberta, Saskatchewan, British Columbia and southeastern Alaska were startled by the vibrations. Local radio stations, newspapers and police departments were swamped with callers asking for details of the tremor. Seismologists were astonished by the size of the events. All across Canada their seismographs recorded strong ground motions.

Earth scientists were surprised not only by the magnitude of these earthquakes but also by their locations. Earthquakes up to magnitude 6.5 have occurred farther north in the Richardson Mountains, but in the Mackenzie Mountains no events larger than magnitude 5 have been reported. However, little is known about the earthquake history of Canada's north; only recently have scientists been able to detect and locate small-magnitude earthquakes in the Far North (Figs. 1, 2). Prior to October 1985 the Nahanni Range was thought to be a relatively quiet earthquake zone.

The Nahanni earthquakes gave earth scientists a unique opportunity to examine two important aspects of earthquake seismology. First, earth scientists can study the effects of intense ground motion on buildings and on natural environments - a knowledge of building dynamics could help us design structures that would better withstand major shocks. Second, the study of major earthquakes gives us more information for earthquake risk analysis: where, how, and how often such events can occur. A greater understanding of earthquake processes would tell us how to improve the National Building Code of Canada, to make Canadian buildings safer.

Before October 1985, most people in the N.W.T. had never felt an earthquake. The first tremor came as a complete surprise. Because no community is closer than 100 km to the epicentres, no major structural damage was reported. Nevertheless, the earthquakes caused widespread alarm, particularly in Wrigley, Fort Simpson, Nahanni Butte and Fort Liard, the four communities closest to the epicentre.

At Wrigley, about 115 km north of the epicentre, residents reported seeing the ground roll. Vehicles bounced on the road and trees and power lines whipped back and forth. Sections of the banks of the Mackenzie River slumped into the water. Inside homes, furniture moved, dishes fell from cupboards, unsupported shelves toppled over, liquids slopped out of containers, doors swung open and shut and walls flexed in and out. One resident was asleep until a lamp fell on his head. Several people felt dizzy. This violent activity was accompanied by rumbling and thunderous sounds that lasted for about 30 seconds.

People reported feeling the October earthquake more than 1500 km away. The isoseismal map shows that intensities did not fall off uniformly (Fig. 3). Intensity IV was reported to at least 1000 km south-east of the epicentre but only to about 500 km to the west. At Yellowknife, 500 km east, the intensity was only III. At Inuvik, about 800 km to the north, no one reported feeling the earthquake. The significant elongation of intensity in the northwest-southeast direction along the strike of the Cordillera has been observed for other earthquakes in western Canada. The larger December earthquake had a similar intensity distribution but the area in which they were felt was slightly greater and included reports of ground movement in the northwestern United States.

The lack of serious damage can be attributed to sparse population in the epicentral region as well to the type of buildings there. Most are one- or two-storey, wood-frame or log structures. These prove most resilient to earthquakes because they can bend and flex without damage.

To discover more about the causes and effects of the main shocks, earth scientists conducted field experiments immediately after the two events. GSC seismologists and technicians from the Pacific Geoscience Centre in Sydney, B.C. and from the Geophysics Division in Ottawa and Yellowknife conducted surveys following both main shocks (Fig. 4).

Helicopters from Fort Simpson deployed portable seismographs in the epicentral region. Each survey lasted about a week. The long distance from Fort Simpson and severe field conditions, with temperatures of -40C and very little daylight in January, limited to five or six the number of recording sites the scientists could maintain (Fig. 5). The seismographs clarified the location of the major shocks and the field surveys allowed scientists to observe the effects of intense ground shaking.

The earthquakes occurred in a north-south elongated zone about 50 km long and 15 km wide. The two main shocks were centred near the middle of the zone and are separated by only a few kilometres. The events define a wedge dipping to the west.

In the central area, scientists discovered evidence of the strong ground motion associated with large earthquakes. Although no surface break was found, large landslides and rockfalls were observed. The biggest slide, a rock avalanche, was triggered by the October earthquake. The avalanche left a 70 metre vertical scarp (Fig. 6) - mute testimony to the huge volume of rock displaced. An estimated 5 to 7 million cubic metres of rocks crashed 1.6 km down from the crest to the toe of the slide.

Fig 6. Rock avalanche Rock avalanche, triggered by the October 5 Nahanni earthquake, is one of the largest ever to have occurred in Canada and the first known to have been caused by an earthquake (Photo by R.B. Horner).

Using data from Canadian and worldwide seismological networks, EMR seismologists defined the focal mechanisms of the earthquakes. The two large shocks each have two possible fault planes (Fig. 7). Both possible fault planes are striking nearly north-south; one dips shallowly to the west and the other dips more steeply to the east. By comparing this information with geological maps of the area, seismologists have deduced that the west-dipping plane represents the fault plane. The major faults of the area are of Laramide age and were created when the MacKenzie Mountains formed. The earthquakes probably occurred along a fault plane parallel to the region's major structural trend. It is puzzling that the earthquakes did not occur on faults mapped at the surface, but the existence of a hidden fault which does not reach the surface can not be ruled out.

Fig 7. Fault-plane Fault-plane solutions for the two main shocks. The 'beach-balls' shows an equal-area plot of the lower focal sphere of the two possible fault planes that satisfy the event's polarity, compression or dilatation, recorded at all the seismograph stations. The two solutions are almost identical, and indicate that both main earthquakes were thrust type. The strike and dip of the west-dipping plane is almost identical to that of the area's major thrust faults (the Iverson or Nahanni faults). However, the dip of the west-dipping plane for the December event is shallower than that for October.

An analysis of where the numerous aftershocks occurred emphasizes the similarity between the main shock mechanisms and the major faults of the region (Fig. 8). The temporary network of portable stations recorded many aftershocks. From these records, seismologists located 288 aftershocks, most smaller than magnitude 3.5, that happened in October 1985, and January 1986 (Fig. 9).

Fig 8. Geology of the Nahanni earthquake epicentral area Geology of the Nahanni earthquake epicentral area. The earthquakes occurred in the Mackenzie Plain, a relatively undeformed plateau between the Nahanni Range and the Mackenzie Mountains. Paleozoic and Proterozoic carbonate and clastic sedimentary rocks at least 8 to 10 km deep are underlain by the Canadian Shield. The area was extensively faulted and folded in the Laramide Orogeny and the Iverson, Battlement and Nahanni thrust faults were created at that time.

Perhaps the most important data recovered from the Nahanni earthquakes are three strong-motion accelerograph records for the December 23 shock. The instruments that recorded these data were left deployed in the epicentral area following the October event in the hope that they would register strong aftershocks in the subsequent months. These recorders have a trigger mechanism that activates them when there is a strong event.

When the December shock struck, the instruments gave scientists a remarkable record of the event. Two of the three records are shown in Figure 10; the upper record (a set of three traces) shows ground accelerations more than twice the acceleration due to gravity. This is the strongest earthquake-induced acceleration ever recorded anywhere. Engineers and scientists are now pondering the implications of these records and will be using them in the future to improve the safety of important facilities throughout North America.

Fig 10. Strong-motion accelerograms Strong-motion accelerograms for two of three sites recorded for the December shock. The upper three traces represent a three-component ground motion display during the event at a site approximately 8 km north and west of the epicentre. The event consists of about 10 seconds of strong ground motion with an extreme peak of motion late in the trace which contains vertical acceleration in excess of 2 g. The actual peak exceeded the range of this particular instrument and has been estimated from the state of the trace before and after the peak. The lower set of three traces shows another record of the same event at a site about 8 to 10 km north of the epicentre. Here the accelerations did not exceed about 30% g.

From our studies of how the large-magnitude Nahanni earthquakes have affected the northeastern Cordillera, we expect that future large earthquakes in the Mackenzie Mountains will be thrust-type events with shallow crustal depth and extensive aftershock zones. We will anticipate surface faulting, although none was found in this case.

A more accurate and comprehensive seismic zoning map of Canada will emerge from the study of these large shocks. In the long run, we will know better how to protect people from seismic hazard.