Martitia Tuttle of M. Tuttle & Associates in Georgetown, Maine, Alan Ruffman of Geomarine Associates in Halifax, Nova Scotia, and others conducted a study of onshore deposits left by the 1929 Grand Banks tsunami along Newfoundland's southern coast. Tuttle and Ruffman found tsunami deposits at 8 locations along the coast of the Burin Peninsula (see attached photographs). From field measurements made at one of these locations, they determined that the tsunami was up to 7 m (23 ft) high and its runup extended 480 m (1,575 ft) inland to an elevation of more than 8.5 m (28 ft) above sea level. In addition, the authors developed criteria for distinguishing tsunami deposits from storm deposits which will aid efforts to assess the tsunami hazard along the Atlantic Seaboard. 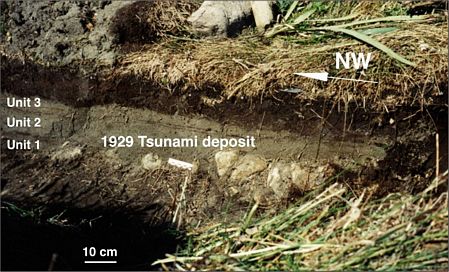 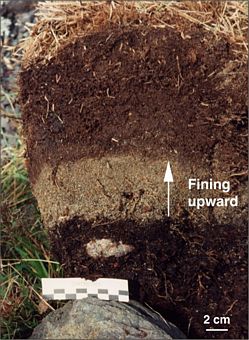 Photograph (above) shows fining upward of a single sandy unit probably related to the decrease in velocity of the tsunami.