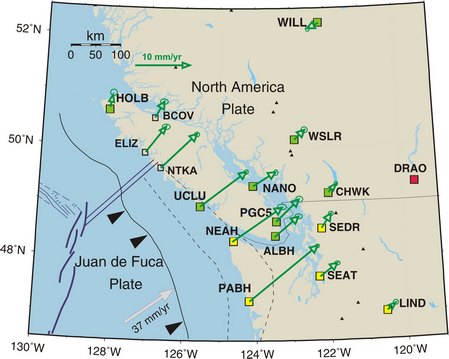 Using the Global Positioning System (GPS) of satellites, and a network of permanent GPS receivers, the relative motion of points on the earth's surface can be monitored at the level of a few millimetres per year. The arrows in this diagram show the measured annual rates and directions of motion of specific sites of the Western Canada Deformation Array (WCDA) relative to a reference site located at the Dominion Radio Astrophysical Observatory (DRAO) south of Penticton. Points on the outer coast of the North American Margin, which overly the locked portion of the Cascadia Subduction Zone, move at rates of over 10 mm/yr in a north-easterly direction. The fact that inland sites move at half that rate, or less, indicates that the outer margin is slowly being compressed like a giant spring. At the time of the next great earthquake it is expected that the accumulated compression will be totally released and that the outer coast of southern Vancouver Island will move up to 5 metres to the south-west.

More information on monitoring crustal deformation can be found on the Geodynamics Site.